One year ago today, I woke up early in the morning. As I slowly opened my eyes to see the world around me, I started to remember where I was. I gently rolled over on my blue plastic mattress, opening my eyes to the sight of my hospital room, the same room I had previously spent two months living in. The room, cold and uninviting, continued to come to the forefront of my awareness as my eye’s adjusted to the dull light pouring in from the windows on the door and wall of my room, leading out to the rest of the unit. As I awoke, through the thick glass, I observed the nurses station simultaneously coming abuzz as the tired night shift nurses passed on their responsibilities to the new team coming in, bright eyed and ready for the day ahead. 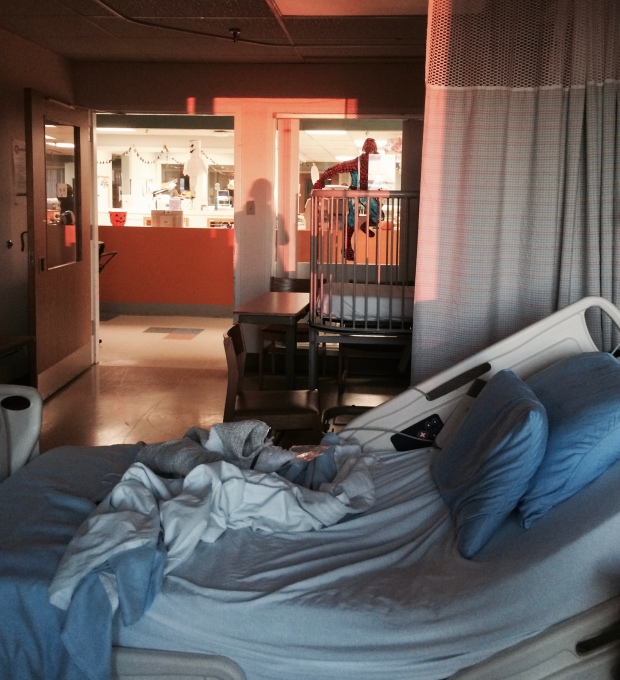 Evening light from the sunset pouring into my room.

The more I slipped out of the last night’s slumber, the more I started to feel innumerable feelings. After all, one year ago today was a big day. I had already spent a week in the hospital trying all sorts of things to nourish my body because it was in the worst shape it has ever been. I was at my lowest weight, looking hollow and gaunt, my hair thinning and falling out. I felt like I was constantly walking around with my head in the clouds and I was barely functioning, sleeping nearly 22 hours a day. After mulling it over for a week, I had finally agreed to be admitted to the hospital as a last ditch attempt at tube feeding. The plan: do a blind tube feed trial with the hopes of “resetting” the gut-brain connection and improving my tolerance of tube feeds. After our agreed upon trial, and failure, my team decided it was time for something new because what we were doing clearly wasn’t working.

One year ago today, though I usually managed to sleep in despite being in the hospital, mainly out of sheer exhaustion, I laid wide awake. Typically, I’d have slept for another few hours after the morning rounds, medications, and vitals and then my mom would come visit for the afternoon. However, this day was different. Around 8:00 a.m., I heard my door crack open and my dad walked in. He was there for his shift of “doctor duty”. Anyone whose ever been in the hospital knows that it can be hard to have family with you every time a doctor visits. They are busy people and can come at unpredictable times, anytime from early in the morning to late at night. One year ago today, we were scheduled for a serious conversation with a new doctor that day and I wanted to have someone there with me. To make sure of that, we had the entire day covered.

After my dad’s shift was done around noon, and the doctor had not been in yet, my grandfather showed up to relieve him. Shortly after they made the switch, the unfamiliar doctor came swiftly walking in. He talked to us about the treatment briefly then asked if we had any questions before promptly leaving the room. Despite all the worry, the what-ifs, and the fear surrounding this conversation, I left it feeling a little dumbfounded. I was nervous regarding this treatment and our conversation didn’t ease any of those concerns. If was brief and nonchalant, not the important conversation we expected. I was told about risks, about liver failure, blood sugar problems, serious infections, the possibility of death, but starting someone on this was normal for him despite being brand new to me. 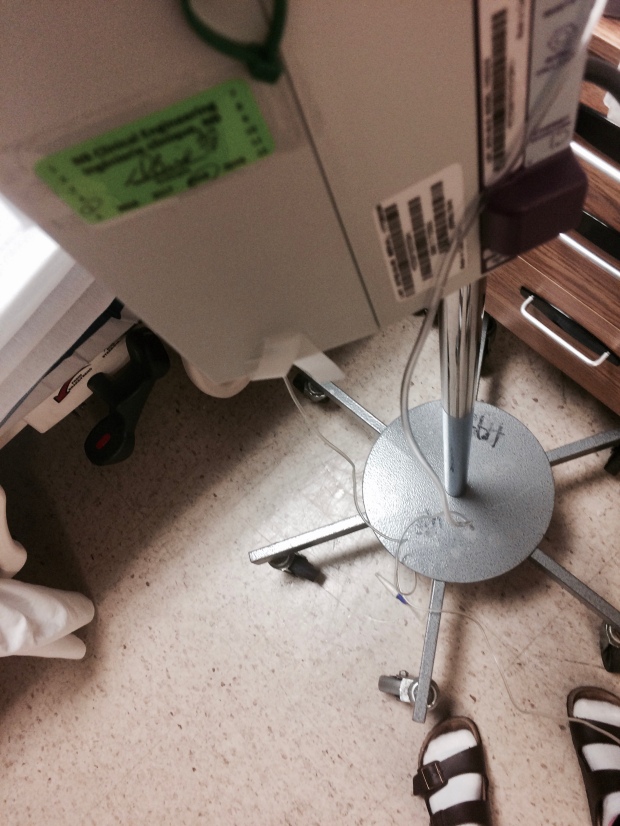 My shadow during my admission

One year ago today, I started on a treatment that equally terrified me yet gave me a sliver of hope. Total Parenteral Nutrition (TPN), a last resort at nutrition, was a shot in the dark that we hoped would stop by body’s pattern of destruction and allow me to rebuild myself, giving me a shot at feeling alive again. We hoped the adverse effects would be low and the benefit high. Unfortunately, I have been affected by some of the side effects, some good, some bad. But the most significant side effect that I’ve had isn’t scary or negative, nor is it bad; it’s the opposite of that, it’s what we were hoping for in starting IV nutrition, it’s life.

Despite the worry, the uncertainty, the fear, the feelings of being overwhelmed and as though I was thrown into a whole new world, one of central lines and sterile fields, I am enormously grateful for the quality of life it has given me. My body is now stronger, I don’t need as much sleep, my brain fog has lifted some and I feel more present in my day-to-day life. I’ve gained new opportunities, experiences, and friendships because of it. I feel like I’m a person again. Most importantly, it provided me the chance to still be here writing this post today.

One year ago today, I had my first infusion of TPN, a treatment that’s considered higher-risk and possibly unsustainable in the longterm, one full of uncertainty for the future.  One year ago today, after all my guests had left for supper and an afternoon of trick or treating around the hospital with the paediatrics department, I jumped into the unknown when my PICC line was hooked up to a big bag filled with a bright yellow fluid containing all the nutrients my body needed. One year ago today, as the solution pumped into my vein for the first time, I was fearful and scared yet cautiously hopeful. One year ago today, I was given a chance at living life again. 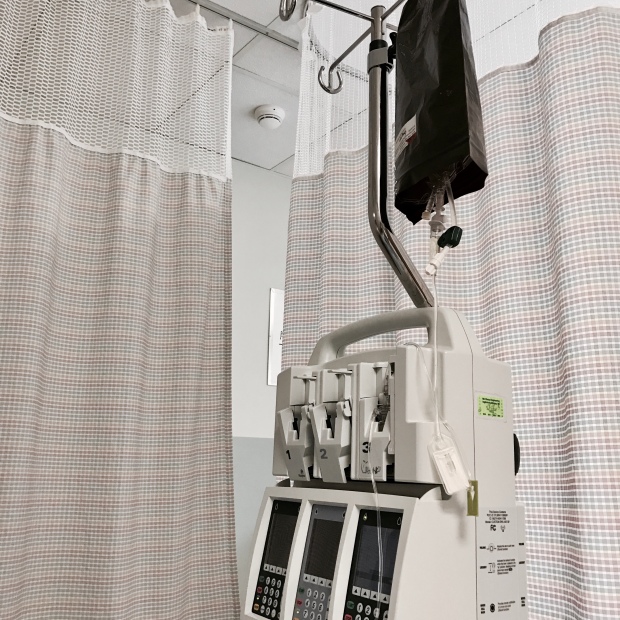 One year later, I still hook myself up once again to my nightly TPN infusion that runs over 16 hours while I sleep. One year later, I am still afraid of the risks associated with this form of nutrition but, one year later, I’ve started to come to peace with it, the uncertainty doesn’t scare me like it did. One year later, the risks it causes to my body feel feel more minute compared to the second chance at life it has given me unlike any other treatment I’ve tried before. One year later, we still don’t know what the future holds, whether I will be able to continue this treatment in the long run nor how it will affect my body but, looking back at a year ago today, at the big, scary decision I faced, I am pleased with the decision I made. It was made with fear in my heart but it was also made with an ounce of hope. That hope is what has brought me to where I am today.

One year ago today, I made an important and frightening decision regarding my health. One year later, I am reassured I made the right one. 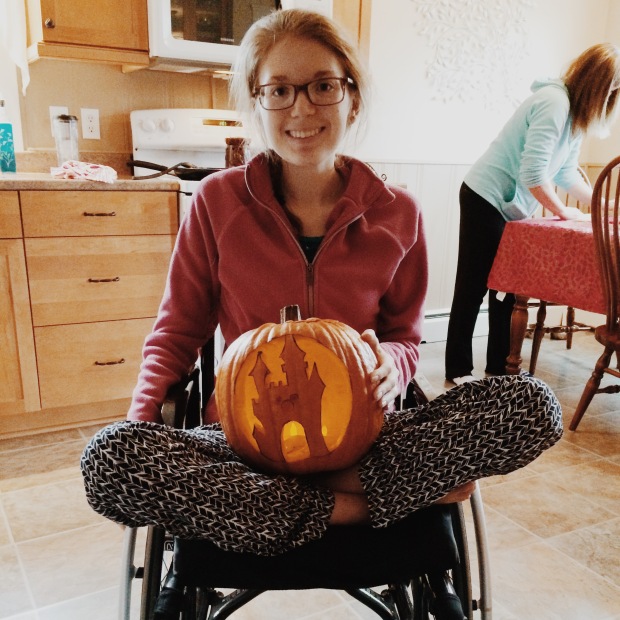 5 thoughts on “One year ago today”

Hello friends! My name is Kathleen Elizabeth and I am 22 years old. When I started feeling quite sick years ago due to my genetic condition, I went through a dark, wintery season, feeling as though everything in my life was flipped upside down. Over time, I learned the trick to living happily with myself and my condition: by discovering that I truly hold within myself an invincible summer; I just needed to find how to channel it. A lover of crafting, decor, writing & science, I keep myself busy while being a part-time Psychology student in my coastal hometown in Atlantic Canada.