They say there are 5 stages of grief: denial, anger, bargaining, depression, and acceptance. Though I’m not terminally ill and grieving the future loss of my life, I definitely have grieved for the loss of my old life. The one where I had boundless energy and a love of food. Where I was physically fit and loved to go to the gym. The one where I would stay up late hanging out with friends in my dorm room.

First along came denial. I would say that’s when my parents and I found out about gastroparesis through our google searches looking for answers. It matched all my symptoms but I held on to the hope that, considering it’s fairly uncommon, that it wouldn’t be my diagnosis. We planned to ask my GI about doing the gastric emptying scan at my next appointment. To our surprise, she brought up doing the test first. When I got the test done, there was one part of me that hoped it would come back abnormal so I could finally have answers but I still hoped it would’t show gastroparesis. I knew that it was a life-altering illness and I wasn’t ready for that.

Next came anger. When I was finally diagnosed with gastroparesis, I was angry. I was angry that it had come to this. I was angry I had an incurable illness. I was angry that my life was changing drastically and there was nothing I could do about it. Some nights, I’d lay awake in bed and ask myself what I did to deserve this. I, of course, knew the answer was that nobody deserves it but it didn’t help. I needed that time to be angry.

After anger came bargaining. This stage was full of all the “what-ifs”. What if we had found this months ago? Could we have stopped it from progressing? If only we had done this test sooner maybe I wouldn’t be so sick. What if I didn’t go away to university? Would I be healthy? I had to find comfort in the saying that “what’s meant to be will be”. If it was meant to happen, there’s nothing I could have done to stop it. I didn’t do anything wrong. It wasn’t my fault.

Later came the stage of depression. I wouldn’t say I was depressed but, somedays, sadness weighed down on me more heavily than others. Sometimes, it felt like I was just moving through life blindly and in a haze. The days felt long and monotonous. I was tired of being in the hospital and tired of being a guinea pig. I wanted my life to change, to get better, to go back, anything really. But there was nothing I could do about that. I needed to live through the rough part in order for things to improve.

Things didn’t get better over night but, once I realized that it was just a bad day, not a bad life, I moved on to the final stage, where I find myself now, acceptance. I’ve accepted that my life has forever changed. I’ve accepted that eating just isn’t something I can do right now. I’ve accepted that I only have limited amount of energy and that, somedays, I need some extra help. I’ve accepted that Ehlers-Danlos and the friends it brought along are now a part of my life and I no longer feel resentful towards it.

Mentally, most of my days are good ones even if my body and stomach don’t agree. My life may be different than what it was before but it isn’t worse. I still laugh and smile. I may not be able to eat right now but I now enjoy the conversation and company at meals so much more. I’m not able to move through life as quickly as I did before but now I know the importance of slowing down and not letting life pass you by. I may not have a lot of good days physically so I’ve come to appreciate the good days so much more.

I may have lost a lot of things in this battle, but I’ve gained a lot of things too. I have a new and improved outlook on life. I have met some amazing people who either are fighting the same battle or want to offer me support in mine. I have a great team of healthcare providers who want to help me life my life as fully as possible. I am better at putting things in perspective and not sweating the small stuff. I’m okay with all the things I’ve lost because it’s made room for all the things I’ve gained.

When talking to people about my illnesses, I’m often met with the same initial response: pity. But, I’ve accepted that this is my life. I’m on a different road than I ever imagined I’d be on and that’s okay. I’m okay with it. It’s okay. 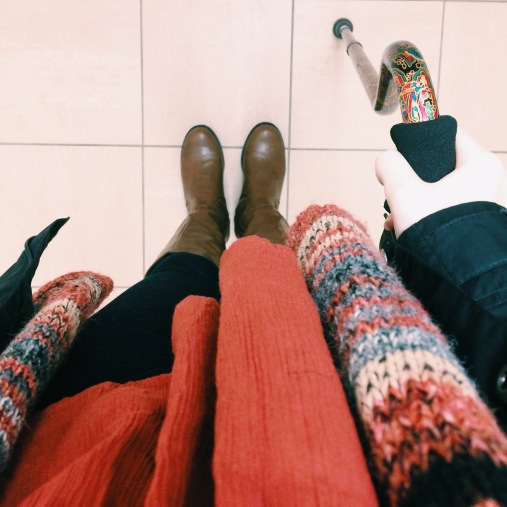 Still rocking that outfit even with a cane 😉

Hello friends! My name is Kathleen Elizabeth and I am 22 years old. When I started feeling quite sick years ago due to my genetic condition, I went through a dark, wintery season, feeling as though everything in my life was flipped upside down. Over time, I learned the trick to living happily with myself and my condition: by discovering that I truly hold within myself an invincible summer; I just needed to find how to channel it. A lover of crafting, decor, writing & science, I keep myself busy while being a part-time Psychology student in my coastal hometown in Atlantic Canada.